"An appeal for mercy, compassion and justice..."

An appeal for mercy, compassion and justice in the Middle East and throughout the world

The Executive Committee of the Canadian Conference of Catholic Bishops, meeting on August 25, 2014, in Quebec City, issues the following appeal:

In the name of the Father of life, and of the Crucified Christ, and of the Spirit of love, we make this appeal for mercy, compassion and justice.

We hear resounding about us still the question that God, Father of all life, posed to humanity at the beginning: “Where is your brother?” We see the homeless and the wounded of the Middle East: in Iraq, Syria and the Holy Land. We hear their cries in Ukraine and in parts of Africa. We observe the persecutions and hardships that hundreds of thousands of people today endure because of their faith and convictions – Catholics, Orthodox, Protestants, Jews, Muslims, members of other religions as well as ethnic minorities. The horrors of war and violence are ravaging so many innocent hearts. Families and children are left without water, food, aid and shelter. Homes and communities are being destroyed. Not only is the future at risk for the people of these regions, but international security itself is in peril. War and violence are again eroding the common bonds of humanity, fragmenting the human family. It is Jesus who is being persecuted, who is homeless, who is hungry, who is in prison, who is being tortured.

As followers of the Crucified One, we recognize particularly in the Middle East the sufferings of our own brothers and sisters in faith. Moved by their pains and afflictions, we make their cause our own. We are united with them in solidarity and faith. Our unceasing prayer and hope are rooted in the love and forgiveness by which Our Lord transforms the human heart. Our one comfort is in the concern and care that people around the world are offering. Encouraged by the calls of Pope Francis for peace and justice, we echo the statements and actions of the leaders of the Catholic and Orthodox Churches of the Middle East. We make our appeal to all people – of every faith and in the name of good will, here in Canada and around the world – to do even more to assist the suffering of those in need.

We pray that the Holy Spirit continue to inspire Canadians, particularly the faithful of our Catholic Church, to support the work of agencies that bring solace and aid to the persecuted and the exiled. We pray too that the transforming power of the Spirit inspire political, religious and community leaders, in each of the troubled
regions of our world, to speak out loudly for justice and reconciliation, to denounce atrocities, to renounce violence and oppression, to announce and demand peace.

“Let me hear what God the Lord will speak, for he will speak peace to his people and to his faithful…” (Psalm 85.8)

Signs and Symbols at St. Peter's: Impressions of Faith in Art 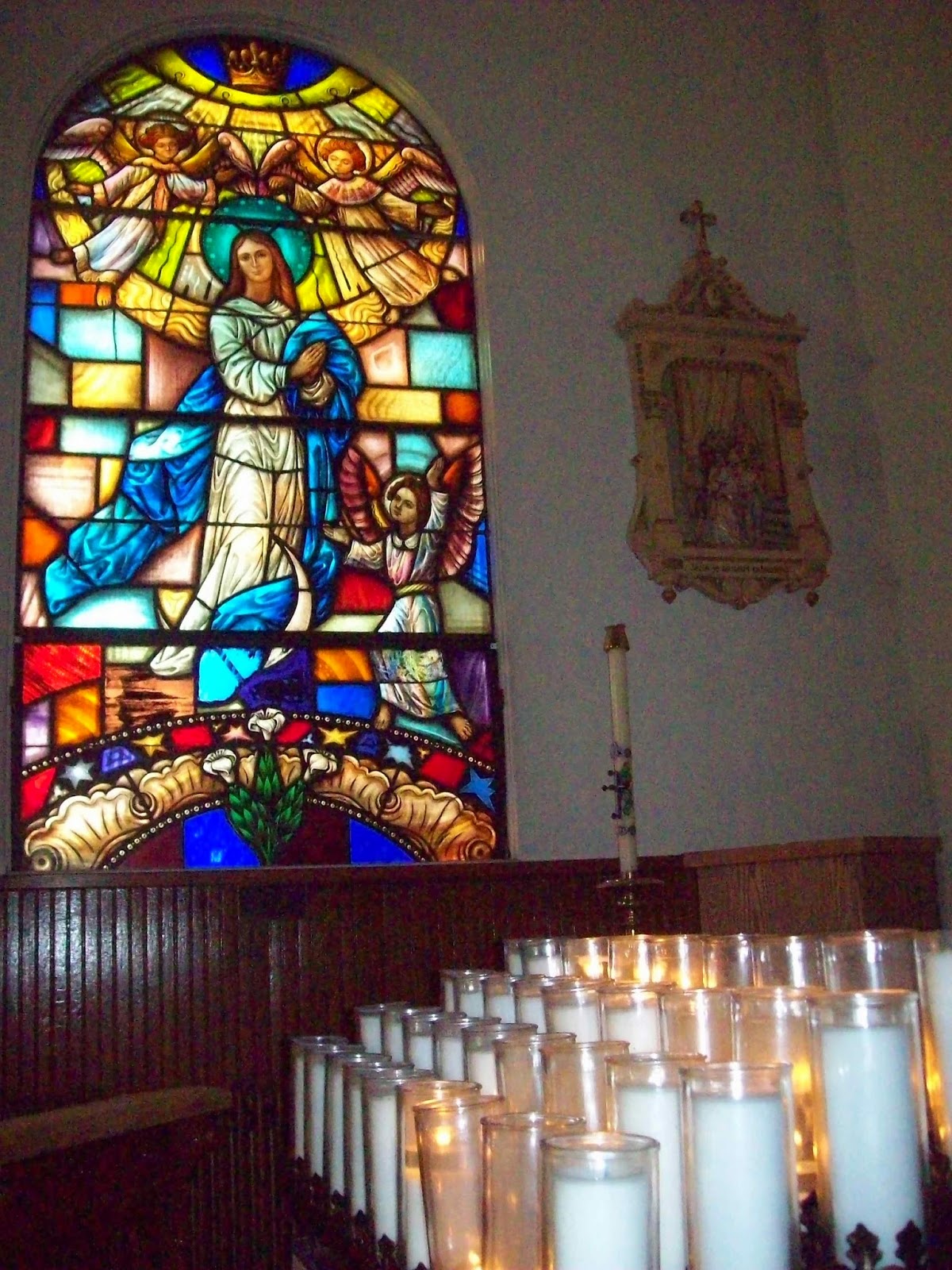 Candles burn near the window of the Assumption of Mary 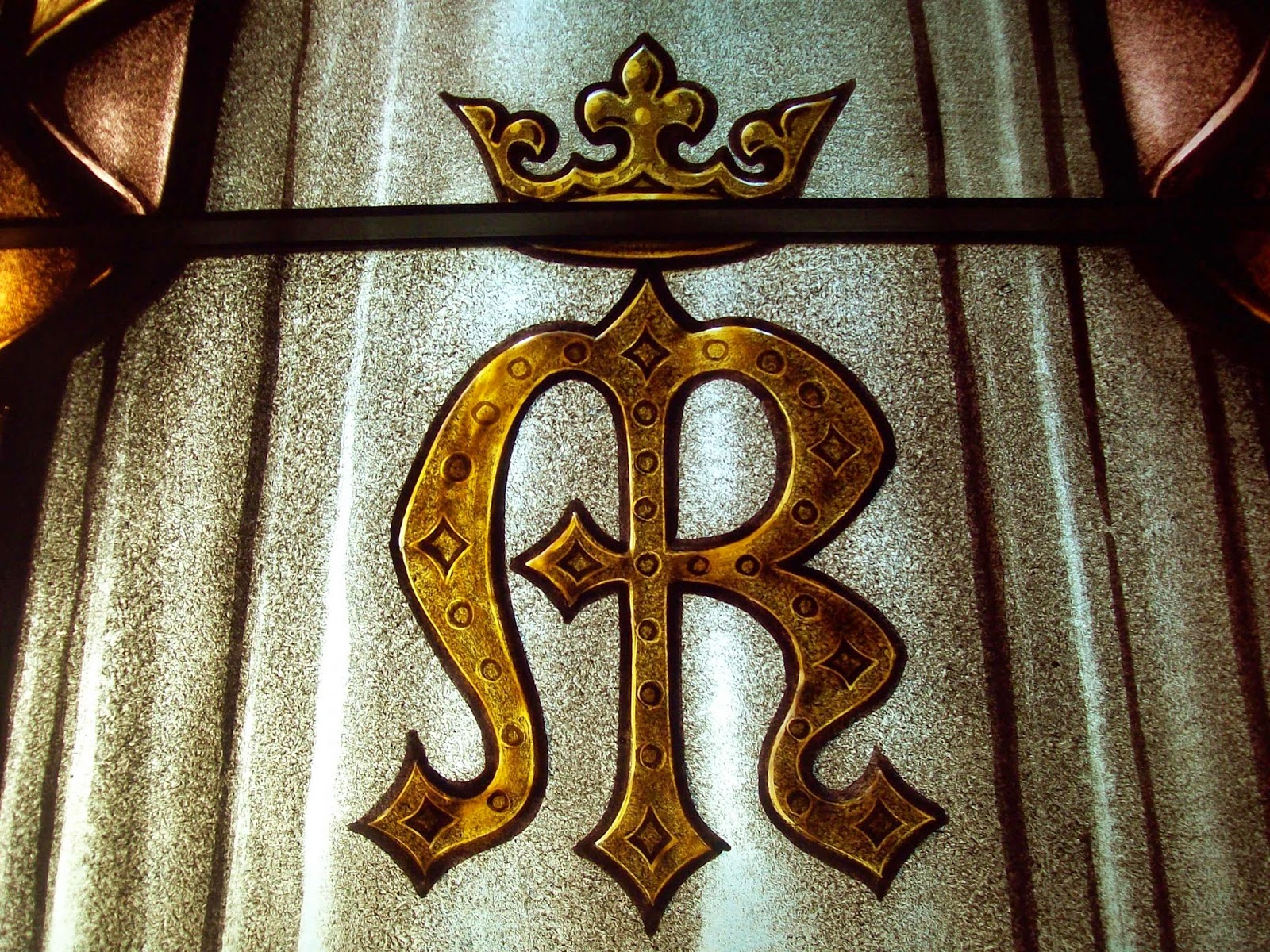 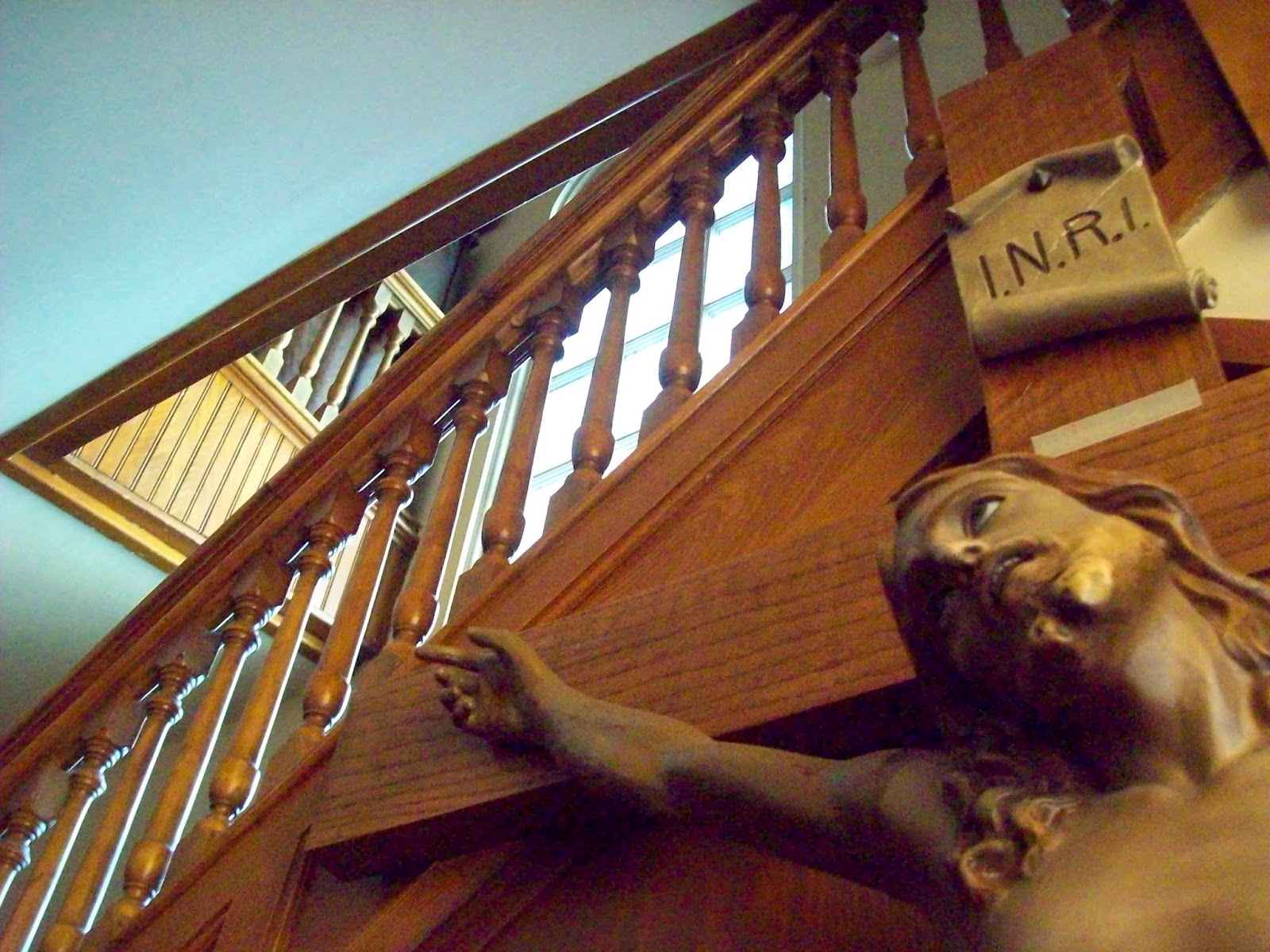 The crucifix at the choir loft stairway 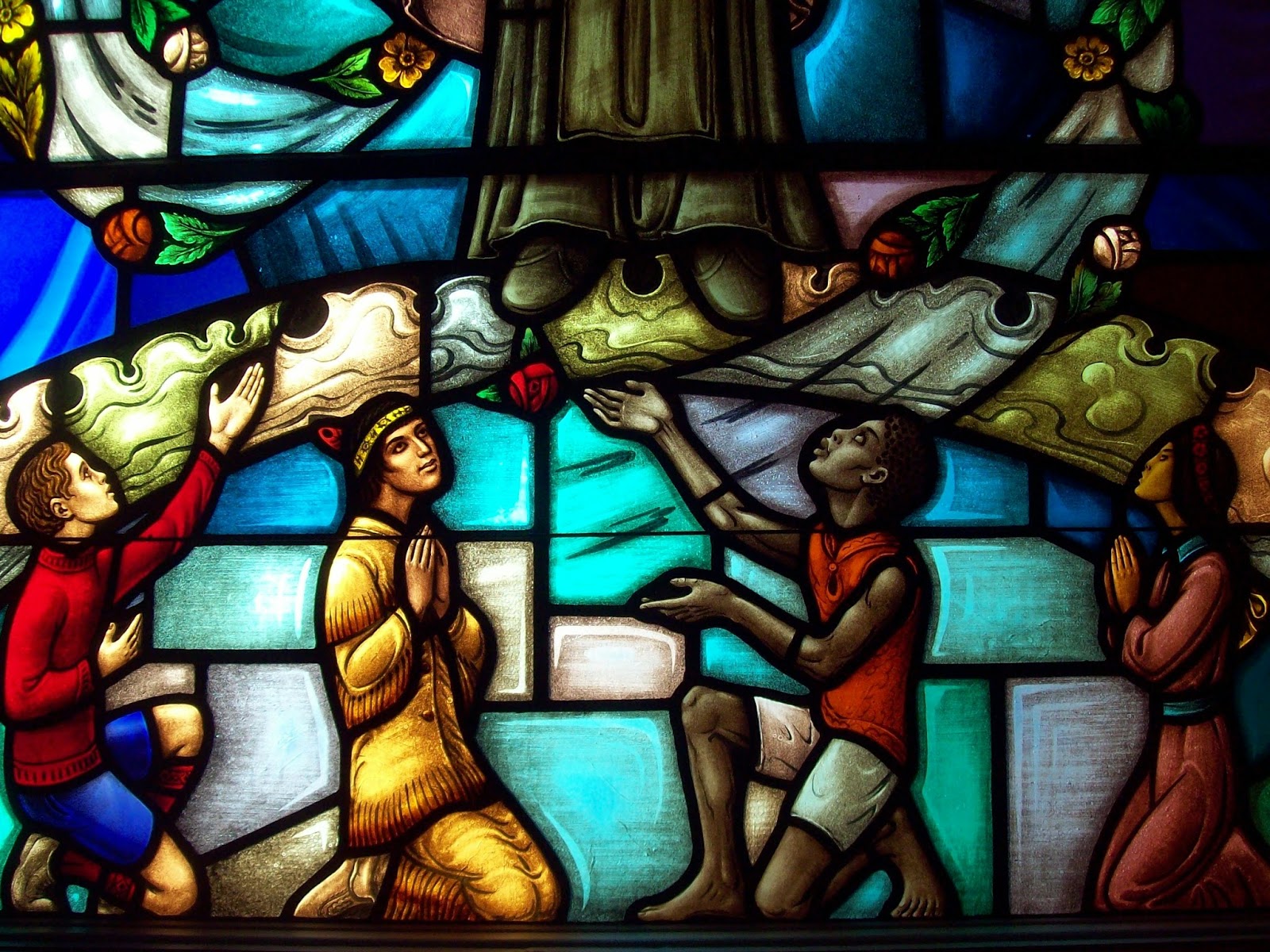 Four children, representing the all the peoples of the world,
as depicted in the window of St. Therese of Lisieux, patron saint of missions and missionaries. 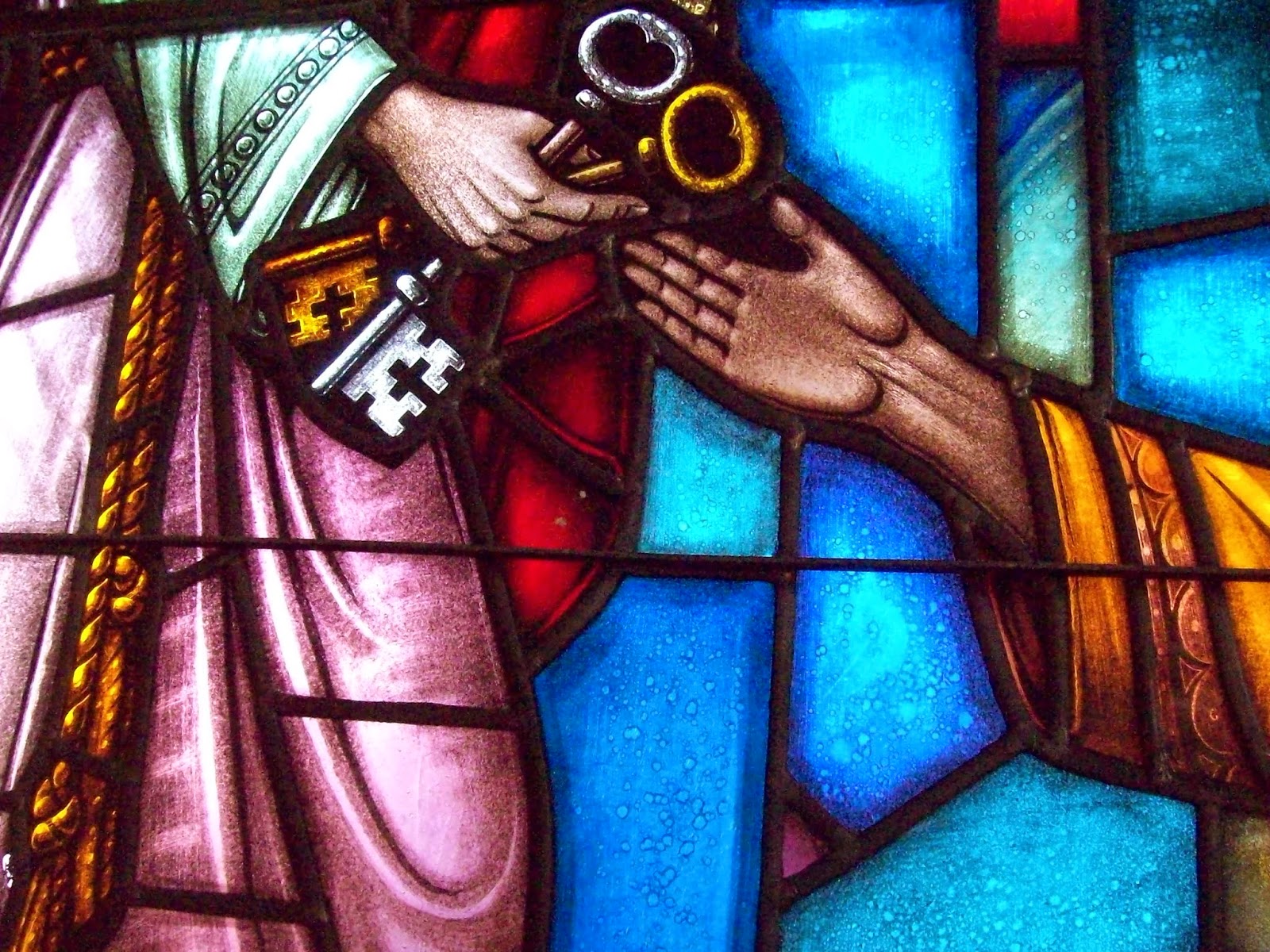 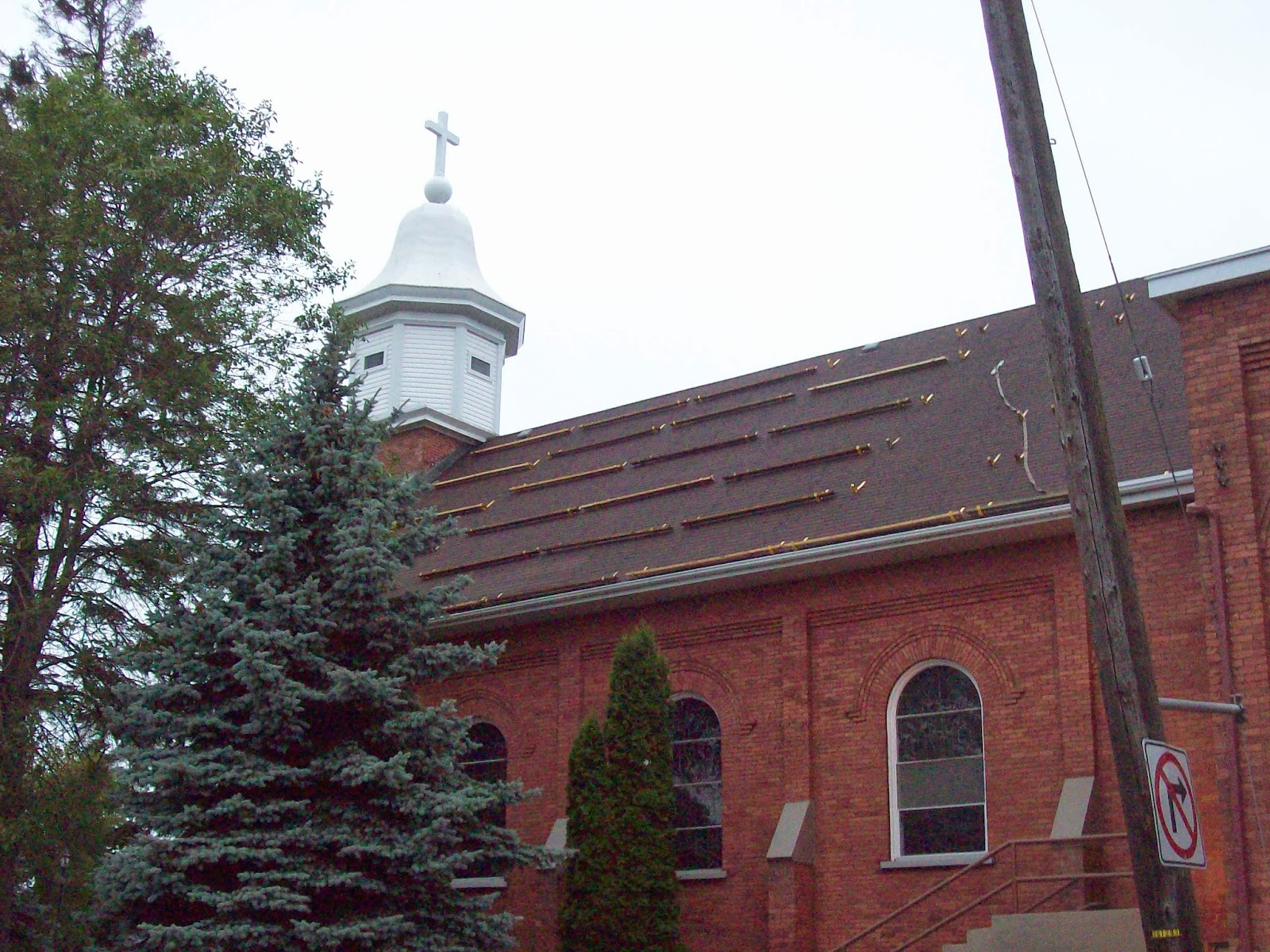 This week work began on re-shingling the roofs of the church, the rectory and the garage.  The rectory is now re-shingled, and preparations are underway to take on the much larger and more challenging church roof.  Just a matter of waiting for a nice, sunny day!
Posted by St. Peter's Church at 11:20 AM 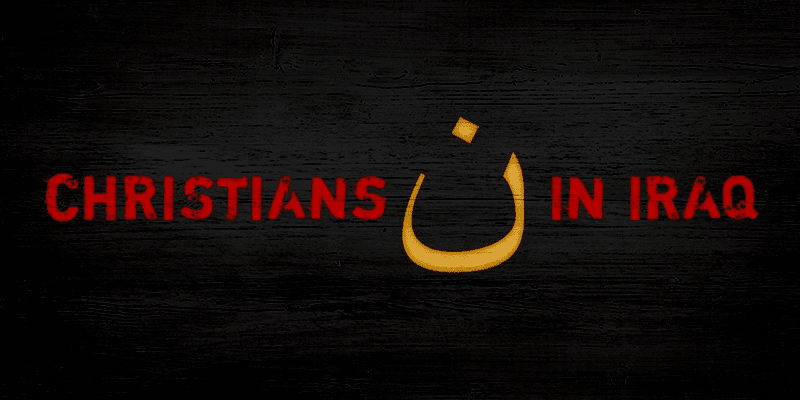 The Knights of Columbus announced today that is establishing a fund to assist those – particularly Christians as well as other religious minorities – facing a horrific and violent persecution and possible extinction in Iraq and the surrounding regions.

“The unprovoked and systematic persecution and violent elimination of Middle East Christians, as well as other minority groups, especially in Iraq, has created an enormous humanitarian crisis,” said Supreme Knight Carl Anderson. “Pope Francis has asked the world for prayers and support for those affected by this terrible persecution, and we are asking our members, and all people of good will, to pray for those persecuted and support efforts to assist them by donating to this fund.”

Anderson added: “It has shocked the conscience of the world that people are systematically being purged from the region where their families have lived for millennia – simply for their faith. It is imperative that we stand in solidarity with them in defense of the freedom of conscience, and provide them with whatever relief we can.”

100 percent of all donations collected by Knights of Columbus Charities, Inc., will be used for humanitarian assistance for those Christians – as well as other religious minorities –being persecuted or displaced in Iraq and the surrounding region.

The Knights of Columbus has a long history of providing humanitarian relief and has done so following Sept. 11, 2001; last year’s typhoons in the Philippines; Hurricanes Katrina, Rita and Sandy; tornadoes nationwide; flooding in Mexico; and tsunamis in Indonesia and Japan.

In addition, the Knights of Columbus has also long supported persecuted Christians. Throughout the 1920s, the Knights provided humanitarian assistance and created international awareness of the persecution of the Catholic Church in Mexico.

The Knights of Columbus is the world’s largest Catholic fraternal organization with more than 1.8 million members worldwide.  Dedicated to charity, Knights last year provided more than $170 million and more than 70 million hours to charitable causes, assisting substantially with several humanitarian disasters from North America to Asia.