Celebrating the Solemnity of Saints Peter and Paul in Rome!

We have some pictures today, but now have text problems.
Hopefully tomorrow will bring better success!

Happy Canada Day to all, especially to the Victoria Avenue crew!

Side Chapel at Santa Maria Maggiore

The crew, minus Josh (photographer) in the Square

A panoramic view of Rome from one of the hills

Seek and you will find...

The good news:  The Rome Gnomes have figured out a way to get some photos posted.
Below are a couple shots from yesterday.  You might recognize some of the scenes from yesterday's post.  It's now after midnight Rome time, so this post will mark the end of the day, but tomorrow should have pictures and accounts of adventures past and yet to come!

Nearing the Basilica of St. John Lateran, side entrance.

An interior shot of the nave of St. John Lateran, flanked by massive and majestic marble statues.

Pilgrims making their way up the Scala Santa (Holy Stairs) on their knees.

A group shot with the facade of St. John Lateran in the background.  Pilgrims are still smiling.  Miracles do happen.

On the return trip to our hotel, a visit to the Church of the Holy Cross in Jerusalem.

To celebrate the eve of the Feast of St. Peter and St. Paul, a fine Roman dinner, complete with Gypsy serenades and assorted peddlers.

To all of our friends back home, especially to the parishioners of St. Peter's Parish, happy feast of Saints Peter and Paul, from the heart of global Catholicism.
Until next time!
Posted by St. Peter's Church at 6:59 PM

After a few hours wait in the Toronto airport, we boarded our plain to begin the flight overseas.  Few of us had much luck getting a good sleep on the overnight flight, but all were happy to land safe and sound in Rome.  We hit the road running by checking in at our hotel at 1 p.m. local time and making a  visit to the nearby church of Santa Maria Maggiore, one of the four major basilicas of Rome.

After a quick lunch break, we visited the Church of St. Clement, and toured the excavations underneath the basilica which dated back to pre-Christian times.  The Basilica of St. John Lateran was our next stop.  This basilica is also one of the four major basilicas of Rome as well as the cathedral for the Diocese of Rome.

Across the street from the Basilica is the Church of the Scala Santa, or the Holy Stairs.  The Holy Stairs, which Our Lord walked up to be condemned by Pontius Pilate, were transported to Rome from Jerusalem under the direction of St. Helena, the mother of Emperor Constantine.  Pilgrims make their way up the stairs on their knees as they recall with devotion the Passion of the Lord.

One of our last visits was to the Church of the Holy Cross in Jerusalem. This church houses many of the relics associated with the crucifixion and death of Jesus, many of which were brought to Rome once again under the patronage of that most notable of religious artifacts: St. Helena.

After a short stop by the hotel, we regrouped for a tasty Roman dinner at a nearby restaurant and wrapped up the day with night prayer in front of Santa Maria Maggiore.

Our Rome Gnomes had a hard time keeping up with the rest of us, and as a result have been having some difficulties posting pictures.  Hopefully tomorrow will be a better day for them.

Thinking and praying for all of you on this eve of the Feast of Saints Peter and Paul!

We'd like to take a moment to introduce our blogging team.  They'll be making occasional appearances in the photos we post, but most of the time, they will be working behind the scenes gathering information for our ongoing blog posts.  Introducing the Rome Gnomes! 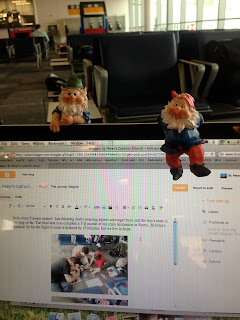 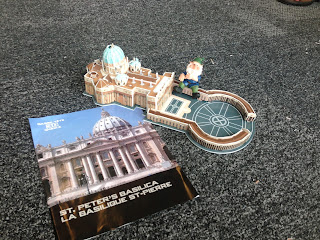 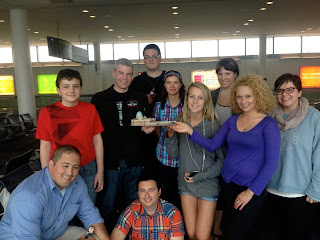 Hello from Toronto airport!  Just finishing Josh's amazing airport scavenger hunt, and the boy's team is winning so far. The final task is to complete a 3-D puzzle of our main destination in Rome...St.Peter's Basilica! So far the flight to rome is delayed by 15 minutes, but we live in hope. 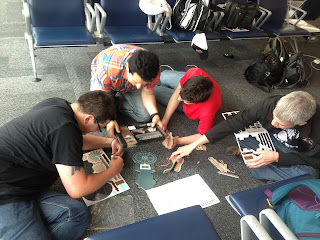 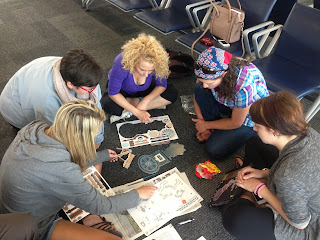 Thanks to everyone who joined us for the send-off Mass this morning and for all who are praying for us and with us.  Ciao for now! 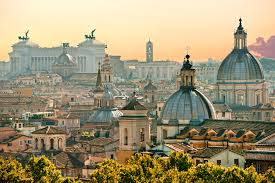 This Thursday, eleven pilgrims will fly out of Thunder Bay to spend a little time in the Eternal City.
Of the group, four are from our parish and the remaining seven come from five other city parishes.
Join us for Mass on Thursday, June 27, at 9 a.m. to pray for God's blessings upon the journey and those who make it.  A reception will follow in the church hall.
Also, you may want to check in on this blog for "news from Rome" as we hope to post some pictures and updates during the course of the week-long pilgrimage.
St. Peter, pray for us!

At a recent meeting, the members of the Thunder Bay Diocesan Executive of the Catholic Women's League pose for a picture.  League members in the diocese are busy preparing for the upcoming Provincial Convention to be held in Thunder Bay from July 7 to July 10.    For more information, visit www.cwl.on.ca. 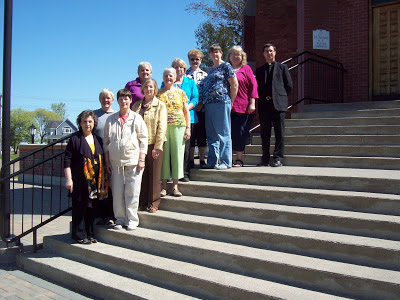 We were blessed this year with beautiful weather for our Corpus Christi Procession.  We had the extra joy of being joined by friends of the young parishioners who made their First Holy Communion that day.
Also present were Sir Knights from the Father Baxter Assembly who formed an honour guard. Below are pictures of the procession, making its way from the church, through the neighbourhood and back to the church for Benediction. 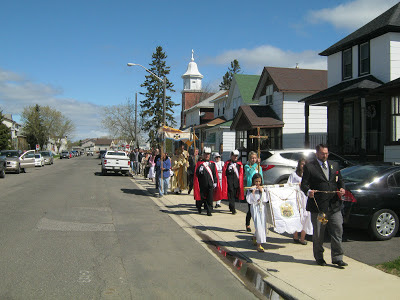 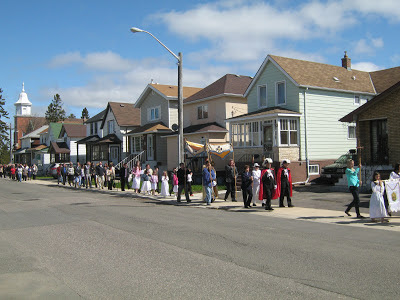 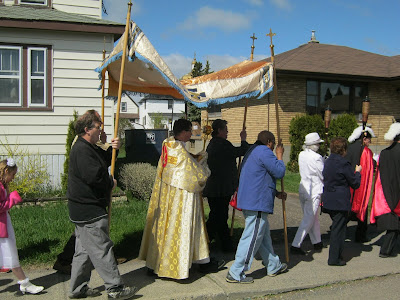 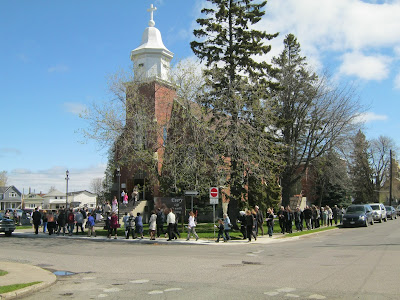 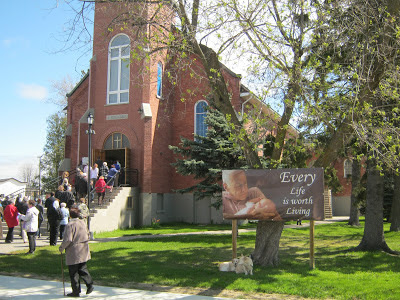 Bishop William McGrattan of the Archdiocese of Toronto led the priests of the diocese in revisiting the gift of priestly ministry as they took part in their annual retreat held at St. Patrick Cathedral.

The retreat was made up of daily conferences, Holy Mass, Eucharistic Adoration, praying of the rosary, time for quiet reflection, meals and fellowship.  Thank you to parishioners and friends for the prayers and spiritual support you offer for your priests! 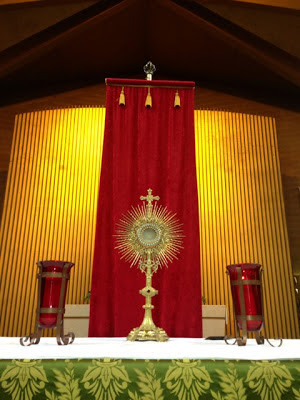 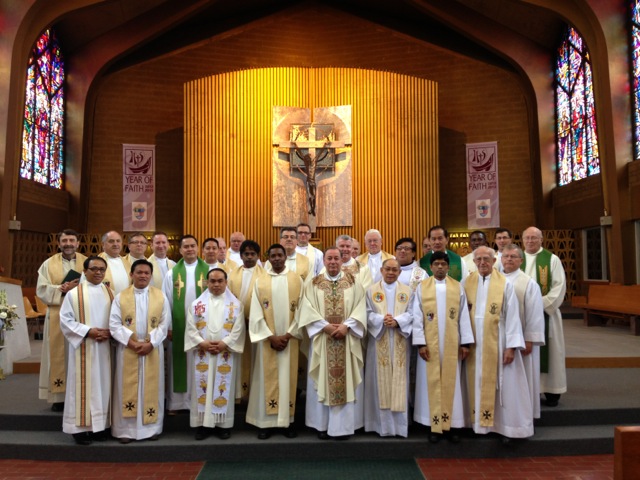 As the priests of the diocese gather for retreat, no Masses will be held in our parish.  Instead, parishioners are invited to attend Mass at the cathedral.