From south of the border in Omaha, Nebraska, comes this inspirational story of another St. Peter's Church.
This video is part of a longer production by Storytel Foundation (www.storytel.org) which will be broadcast on EWTN on April 10.
Posted by St. Peter's Church at 9:44 PM

24 Hours for the Lord

24 Hours for the Lord is a new initiative of the Pontifical Council for Promoting the New Evangelisation.  The initiative, which begins on Friday 28 March 2014, focuses on the Sacrament of Reconciliation.  It's hoped that at least one church in each diocese will remain open for the full 24 hours to offer the Sacrament to those who wish to celebrate it, preferably within the context of Eucharistic Adoration.

In Rome, the initiative will be presided over by Pope Francis with a penitential celebration in St. Peter's Basilica, during which the Holy Father will be available to administer the Sacrament.
At the conclusion of this ceiebration, confessions will continue to be heard in a number of churches in the centre of Rome. These churches will remain open to accommodate those who wish to encounter the Lord and experience his mercy.
The celebration, along with Eucharistic Adoration, will continue until 4pm on Saturday 29 March, and will conclude at 5pm, with the celebration of First Vespers of Dominica in Laetare in the Church of Santo Spirito in Sassia, the Roman Sanctuary of Divine Mercy.

24 Hours for the Lord is for the whole Catholic Church and one of its main aims is to create a powerful tradition.  It's hoped that the initiative will be held annually on the Fourth Sunday of Lent.

(above info. courtesy of The Catholic Church in England and Wales)


In the Diocese of Thunder Bay


"24 Hours for the Lord" will be hosted at St. Agnes Church, 1019 Brown Street, from noon on Friday, March 28, to noon on Saturday, March 29.  Adoration of the Blessed Sacrament will take place for 24 hours and priests will be available during that time for anyone wishing to receive the sacrament of Reconciliation.
Posted by St. Peter's Church at 8:29 AM

Form teams of 4-6 members
to compete in this epic battle of the brains,
and prepare yourself for a good time!

Freewill donation from each team member can be made at the door
and will go to support the work of our local Catholic Action Centre.
Contact the parish office for registration info.
All welcome!

The Way of the Cross will be prayed in the church
every Friday of Lent beginning at 7 p.m.
All are welcome.

Now the Cross as Jesus bore it
Has become for us who share it
The jewelled Cross of Victory.
Posted by St. Peter's Church at 6:01 PM

Good News for a Good Cause 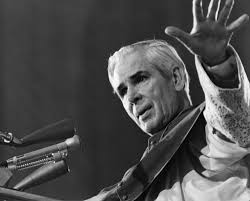 Peoria, IL — The Most Reverend Daniel R. Jenky, CSC, Bishop of Peoria and President of the Archbishop Fulton Sheen Foundation, received word early Thursday morning that the 7-member board of medical experts who advise the Congregation for the Causes of the Saints at the Vatican unanimously approved a reported miracle attributed to the intercession of the Venerable Servant of God Archbishop Fulton Sheen.


The case involved a still born baby born in September 2010.  For over an hour the child demonstrated no signs of life as medical professionals attempted every possible life saving procedure, while the child’s parents and loved ones began immediately to seek the intercession of Fulton Sheen.    After 61 minutes the baby was restored to full life and made a full recovery.  The child, now three years old, continues in good health.


Today’s decision affirms that the team of Vatican medical experts can find no natural explanation for the child’s healing.  The case will next be reviewed by a board of theologians.  With their approval the case could move on to the cardinals and bishops who advise the Pope on these matters.  Finally, the miracle would be presented to Pope Francis who would then officially affirm that God performed a miracle through the intercession of Fulton Sheen.  There is no timeline as to when these next steps might  move forward.


“Today is a significant step in the Cause for the Beatification and Canonization of our beloved Fulton Sheen, a priest of Peoria and a Son of the Heartland who went on to change the world.  There are many more steps ahead and more prayers are needed.  But today is a good reason to rejoice,” commented Bishop Jenky.


Fulton Sheen was born May 8, 1895 in El Paso, IL outside of Peoria.  His family moved to Peoria so that Fulton and his brothers could attend Catholic school.  He grew up in the parish of the Cathedral of St. Mary where he was an altar server and later ordained a priest of the Diocese of Peoria.  After advanced studies and service as a parish priest in the city of Peoria, Fulton Sheen was a professor of philosophy and religion at the Catholic University of America in Washington, DC.  In the 1930s he became a popular radio personality and later a TV pioneer.  His weekly TV program, “Life is Worth Living” eventually reached 30 million viewers and won an Emmy award for outstanding TV program.


From 1950-1966, Bishop Sheen was the national director of the Society for the Propagation of the Faith in the United States, the Church’s primary missionary apostolate.  In 1966, he was named Bishop of Rochester of New York where he served until his retirement in 1969, when he was named honorary Archbishop by Pope Paul VI.  Fulton Sheen died at the entrance to his private chapel in his New York City apartment on December 9, 1979.


In September 2002, Bishop Jenky officially opened the cause for the beatification and canonization of Fulton Sheen.  For six years, the Sheen Foundation, the official promoter of the Cause, gathered testimony from around the world and reviewed all of Sheen’s writings, before sending their conclusions to the Vatican.  In June 2012, Pope Benedict affirmed the investigation that Sheen had lived a life of heroic virtue and holiness.  Sheen was then titled “Venerable.”


Pending further review by the theologians and the cardinals who advise the Pope through the Congregation for the Causes of the Saints, should Pope Francis validate this proposed miracle, Sheen could then be declared “Blessed” in a ceremony that could be celebrated in Peoria, Sheen’s hometown.  Upon the Holy Father signing the decree for the beatification, an additional miracle would lead to the Canonization of Archbishop Sheen, in which he would be declared a “Saint.”


For more information about Fulton Sheen and the Cause for his canonization, visit: ArchbishopSheenCause.org