"A Touch of Mystery"

The following article was written by a parishioner, Angela Meady, for the Kanadsky Slovak Newspaper.  She has kindly given permission for us to post the article on our parish blog.  Enjoy!

St. Peter’s Slovak Roman Catholic Church in Thunder Bay, Ontario celebrated its one hundredth anniversary a few years ago. Needless to say, the building is in need of some renovation and restoration
here and there. The carpets which covered the front altar area were removed and the original wood floors were repaired and re-stained and now look beautiful. When it was decided that the old carpeting in the sacristy should also be removed and new flooring installed, it was expected that we might see similar vintage wood flooring underneath. Instead, what parish priest Father Terry Sawchuk discovered was a great surprise.

Beneath the carpet was the symbol of the Slovak nation, undisturbed for many decades. It appeared to have been handmade by someone using red, white and blue tiles cut to form the familiar shape. No one who saw it was able to recall it being made or even ever having seen it before. Rev. Sawchuk was enlightened by parishioners about what the symbol meant to a Slovak church and he took it upon himself to try to preserve
it. With delicate movements and great patience he endeavoured to pry the tiles up with the intention of re-assembling them onto a wood plaque which could be displayed as a memento of the Slovak roots
of the parish. Regrettably, the tiles proved too fragile and friable.

Despite the best intentions, it soon became obvious that the stubborn image did not want to leave the floor.
One might imagine the original artist’s thoughts as he installed the tile, “No matter what the future might bring,
this symbol of Slovakia will stay here forever!” So, in the end, the design was photographed for all to see
and remember, and the new flooring then went over it. I hope that Kanadský Slovák readers will appreciate this intriguing bit of Slovak-Canadian history which came to light this year. It is history with a touch of mystery, and if any reader happens to know details about this image at St.Peter’s Church, we would love to hear from you.
Angela Mikita Meady
ameady@tbpl.ca 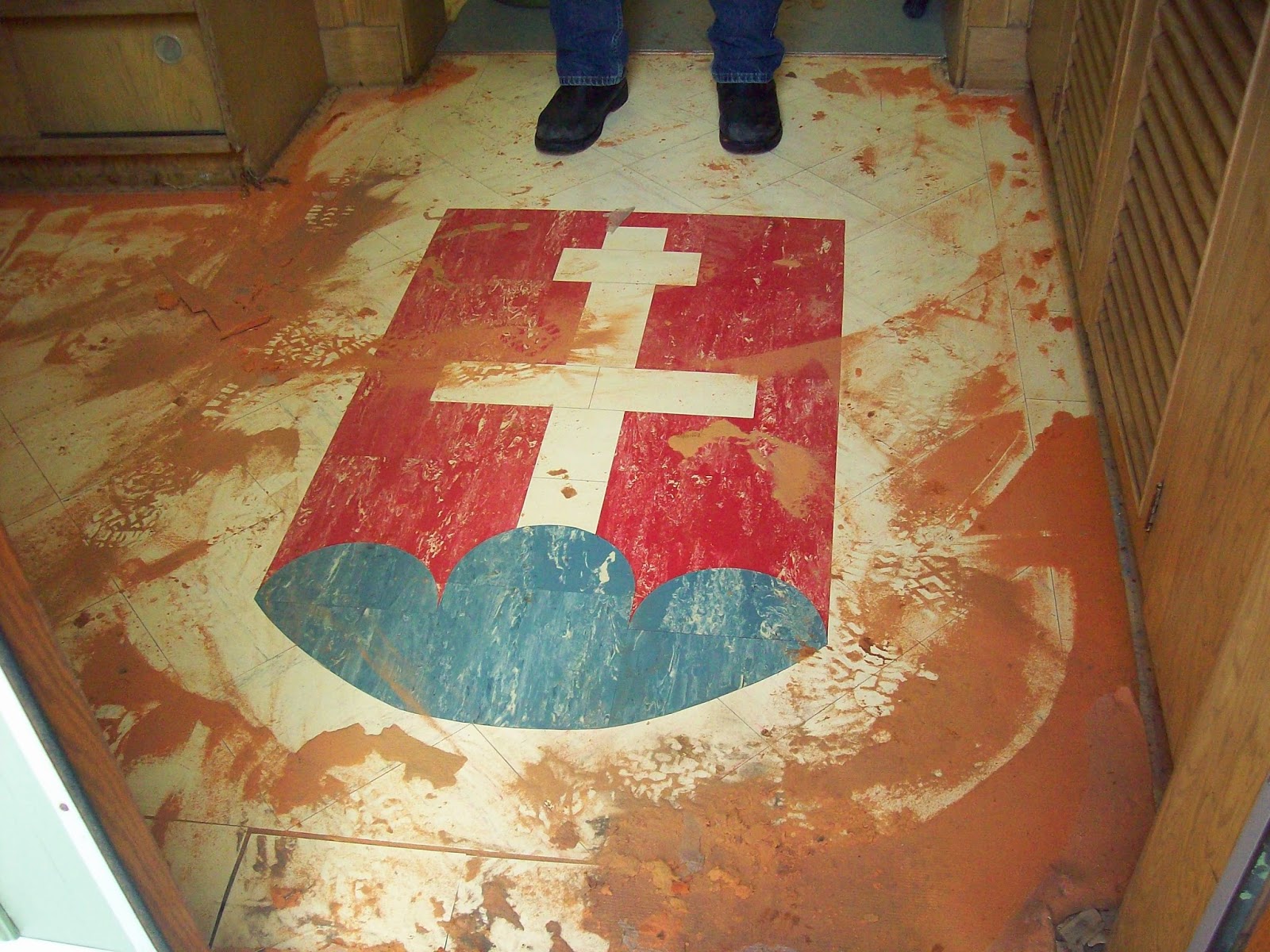 Our Annual Outdoor Mass will be held Sunday, July 27, at 10 a.m. in the church yard (weather permitting).

The Parish Picnic will follow immediately afterwards.  Parishioners are invited to bring salads and desserts.  Hot dogs and hamburgers will be supplied.  There is no cost to attend.
Visitors and guests welcome!
Posted by St. Peter's Church at 9:59 PM