This Sunday, March 11, you are invited to join us in the parish hall after the 10 AM Mass for our Soup and Sandwich special! Tickets will be available at the door for $5/ ticket or for an free-will offering.   Any extra soup will be available for purchase as 'take-out.'    Proceeds will go the parish roof fund.
Posted by St. Peter's Church at 5:22 PM

Our youth weather it out!

Our most recent epic snowstorm (pictures below) was not enough to deter a group of youth from gathering for our first youth night of the year.  ﻿
At their request, future youth nights will be held twice a month instead of once a month.
The next gathering will take place this Sunday, March 11, from 7 to 9 p.m.  Youths grade 8 and up are welcome! 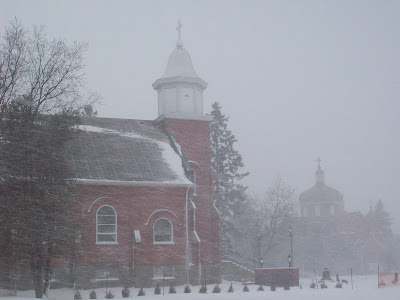 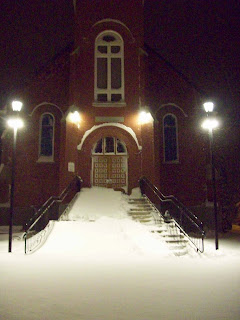 Among the Wild Beasts...

[After Jesus was baptized], the Spirit immediately drove him out into the wilderness. He was in the wilderness for forty days, tempted by Satan; and he was with the wild beasts; and the angels waited on him.  Now after John was arrested, Jesus came to Galilee, proclaiming the good news of God, and saying, ‘The time is fulfilled, and the kingdom of God has come near; repent, and believe in the good news.’  - Mark 1:12-15

After his Baptism, which marked the beginning of his public life, Jesus was led out by the Holy Spirit into the desert.  At first sight, it may seem like a strange way to begin public life – by taking up residence in solitude among the wild beasts.  Yet here in the desert of interior recollection and struggle Jesus would undergo the necessary journey of entering in to the heart of  his mission.
The core of Jesus’ mission, as described by Pope Benedict XVI, was to “find the ‘lost sheep’, to bear it on his shoulders and to bring it home” (Jesus of Nazareth, 26).  He had to descend into the “perils besetting mankind” and take upon himself the sin and suffering of humanity so as to “lift up fallen humanity” (26).  In the wilderness, Jesus began what the Apostle’s Creed speaks of as the descent “into hell”, a descent which would reach its fulfillment in what unfolded after his own Death (26).
He was in the wilderness for forty days, a number which the Fathers of the Church regarded as “a numerical sign for this world. The four ‘corners’ encompass the whole world and ten is the number of the commandments.  The number of the cosmos multiplied by the number of the commandments becomes a symbolic statement about the history of this world as a whole” (29-30).
In those forty days, Jesus embraced the drama of human history, descending into the abyss in order to redeem fallen humanity.   Imagine what this harrowing descent into the sin and suffering of the ages must have been like!  Every murderous act and thought, every massacre and every famine, every sacrilege, profanity, infidelity and betrayal, all the darkness of human history,  Jesus took unto himself.
Rightly did the prophet Isaiah foretell that  “It was our weaknesses that he carried, our sufferings that he endured....We had all gone astray like sheep, each following his own way;  but the Lord laid upon him the guilt of us all” (53:4-6).
After having faced temptation, and having survived the forty days among the “wild beasts”,  Jesus emerged triumphant, ready to proclaim that “The time is fulfilled, and the kingdom of God has come near; repent and believe in the good news.”
The forty days of Jesus can teach us that the defeat of sin begins in our own life when we acknowledge in the core of our being the wound it inflicts upon ourselves and others.  Coming face to face with the truth is a critical first step.
When Leonardo Da Vinci was painting his masterpiece, The Last Supper, he would hire models to pose as different characters in the scene. As his model for Christ he found a handsome, young man who sang in one of the churches of Rome.  His name was Pietro Bandinelli.
Years passed, and the painting was still unfinished.  All the disciples had been painted except one – Judas Iscariot.  Da Vinci began his search, once again, this time for a man whose face was hardened by sin.
Finally he found a man on the street whose face was so villainous that Da Vinci shuddered every time he looked at him.  He hired the man to pose as Judas.  When the painting was complete and Da Vinci was about to dismiss him, he said, "I haven’t yet found out your name."
To the amazement of Da Vinci, the man replied, "I am Pietro Bandinelli.  I also sat for you as your model of Christ."*
The sinful years had disfigured the face of Pietro so much that he was no longer recognizable.  Sin has this effect.  It disfigures the image of goodness, the very image of God.
As the Lord was impelled into the desert, the Holy Spirit impels us too, to make our own “forty days”, to journey through the desert of life without being consumed by the wild beasts of moral recklessness, to contemplate the effects of sin so as to be renewed in our resolve to follow Christ who was victorious over sin and death.
*(Da Vinci/Bandinelli story found in Anthony Castle’s “More Quips, Quotes and Anecdotes”)
Posted by St. Peter's Church at 11:27 AM