Just a couple quick online reminders as we prepare to celebrate the feasts of the Sacred Heart of Jesus and the Immaculate Heart of the Blessed Virgin Mary:

Tomorrow's Mass (July 1) for the Solemnity of the Sacred Heart of Jesus will be at 9 a.m., followed by a short service of Adoration of the Blessed Sacrament and Benediction.

We also celebrate tomorrow the World Day of Prayer for Priests and Canada Day.

Saturday's Mass (July 2) for the Memorial of the Immaculate Heart of Mary will be at 9 a.m., followed by the Sacrament of Anointing of the Sick.

Most Sacred Heart of Jesus, have mercy on us!
Immaculate Heart of Mary, pray for us!
﻿
Posted by St. Peter's Church at 3:33 PM

Email ThisBlogThis!Share to TwitterShare to FacebookShare to Pinterest
Labels: feast

The Solemnity of Sts. Peter and Paul is only hours away!  This year's feast bears special significance as it also marks the Holy Father's 60th anniversary of priesthood.
As noted in a previous post, our celebration of this anniversary will begin with a Holy Hour at 7 p.m. tomorrow followed by a DVD presentation on the pope.  Refreshments will served.
A proposal to serve 'Eggs Benedict' in tribute has been panned in the wake of cholesteral-related questions and other worthy concerns.  However, a little 'B&B' (Benedictine and Brandy) will be on hand to help out the coffee.  Pictured below is the notable 'coffee assistant':
﻿
Courtesy of Wikipedia, via a parishioner, here are a few interesting facts about 'Benedicitine' liqueur (and Catholic culture!) :


"Benedictine is a herbal liqueur beverage developed by Alexandre Le Grand in the 19th century and produced in France.  It is claimed that at the Benedictine Abbey of Fecamp in Normandy, monks had developed a medicinal aromatic herbal beverage which was produced until the abbey's devestation during the French Revolution and that from this Le Grand developed the formula now in use....
The recipe is a closely guarder secret, ostensibly known to only three people at any given time....
B&B was developed in the 1930s when consumers began a trend of mixing Benedictine with brandy to produce a drier taste....
Every bottle of Benedictine has the initials D.O.M. on the label. Mistakenly thought by some to refer to "Dominican Order of Monks", it actually stands for "Deo Optimi Maximo"; "For our best, greatest God".
Well said!
Posted by St. Peter's Church at 4:35 PM

Email ThisBlogThis!Share to TwitterShare to FacebookShare to Pinterest
Labels: variety

For the Feast of Our Lady of Mount Carmel, (Saturday, July 16) a pilgrimage to the Marian shrine on Memory Road (south of Thunder Bay) and St. Benedict's Chapel (Highway 61 at Boy Scout Road) is being planned.
Pilgrims are asked meet here at St. Peter's Church to board the bus or car pool for a departure time of 10 a.m.  The visit to the shrine will be followed by Mass and picnic at St. Benedict's.
To register as a pilgrim, please add your name to the sign up sheet in the church foyer, or contact the parish office.  A special invitation is extended to families and youth.
Below are a couple of pictures of St. Benedict's from the not-too-distant past when the white stuff was still with us...
St. Benedict's is a mission of Holy Family Parish, whose pastor is Fr. Antoni Fujarczuk.
Mass is offered there on the third Sunday of each month.
An interior view of the church...
...and the 'confessional' in the sacristy.
Posted by St. Peter's Church at 3:29 PM

To search and to find...

The following is a timely article entitled "Going in Search", written by Joseph Cardinal Ratzinger.  It is one in a short series of reflections called, "Meditations at Vacation Time."
The reference to "hopelessly jammed" roads may not apply as much to Northwestern Ontario as it does to other areas, but I'm sure we can still appreciate the point.    Enjoy!
Going in Search
One of the remarkable facets of our modern civilization is the reappearance of the nomadic element:  every weekend entire columns of automobiles stream out of the towns, only to return to their points of departure on Sunday evening, along roads that are hopelessly jammed.  When it is vacation time, this phenomenom becomes a veritable mass migration; an entire nation seems to be on the road.  In the so-called highly developed countries, the roads are among people's most frequented locations, and the money currently invested in them is an indication of the state of mind that causes people to become restless wanderers.  What is the reason for it?

Clearly, people do not really feel at home in their houses and apartments.  Many of them get out of their "home" as quickly and as often as they can.  Their house seems to be more an expression of the prison of everyday life than a place of security where one is glad to be.  We can suggest, therefore, that this escape to four wheels indicates a yearning to throw off the constraints of the workaday world and to embrace freedom, the open spaces, an entirely different milieu, a place where, at last, one can be oneself in creativity and freedom.  This regular mass migration on the part of industrial society thus expresses something very profound about man and human nature.  He cannot be completely at home among his possessions.  He is driven by an unrest, yearning for something more, something bigger.  He is looking for a freedom that transcends the freedoms and fulfillments of settled life.

Cannot we see here somthing of the truth of what the Bible says about man being a pilgrim in this world, unable completely to find a home in it?  Surely we can discern here something of the restlessness of heart of which Augustine speaks - Augustine, who had been a restless seeker, unsettled and driven about, until he finally grasped why nothing was enough for him.  Today's nomad may feel that the automobile (and auto is the Greek word for 'self') is an expression of his freedom and self-determination, something that is irreplaceable quite apart from its functional usefulness.  But does it give him selfhood and freedom, or does it not in fact force him back into the rat race?
So our vacation habits could lead us to take a good look at ourselves and encourage us to embark on a more momentous adventure than we generally envisage.  Surely the journey which is really worthy of man is that which takes him out of everyday constrictions in the search for the Eternal, the search for the face of God, and hence enables him to transcend all earthly limitations.  And might this not result in man discovering both freedom and a sense of being at home?

Eternal Rest Grant Unto Them...

Despite the low temperature and torturously cool wind, this past Wednesday's "Prayers for Deceased Priests and Bishops" brought out a strong crowd of pray-ers from  around town.  Pictured below are a few of the attendees, including Msgr. Stilla from St. Patrick's Cathedral, who led the evening's prayer service. 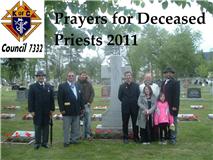 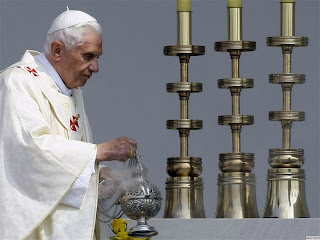 Pope Benedict XVI pictured celebrating Mass this past weekend
during his apostolic visit to Croatia.

Catholics around the world are being invited to join in prayerful celebration as our Holy Father celebrates 60 years of priesthood on June 29, the Solemnity of Sts. Peter and Paul.
A Holy Hour of Prayer will take place here at St. Peter's on Wednesday, June 29 at 7 p.m..  After the Holy Hour a documentary entitled "Pope Benedict XVI: A Love Affair with Truth" will be shown in the church hall.

On behalf of Knights of Columbus Council 7332, all are invited to attend the annual memorial prayer service for deceased bishops and priests of our Diocese.  The service will be held this Wednesday, June 8, at 7 p.m. at the Priest's Plot in St. Patrick's Cemetery.  The service will be led by Monsignor Stilla.

Prayer for a Deceased Priest
Among Your apostolic priests, O God,
you honoured Your servant (Name) with the priestly dignity.
Grant also, to number him always in their company.
Through Christ, our Lord. Amen.
Posted by St. Peter's Church at 3:04 PM

Email ThisBlogThis!Share to TwitterShare to FacebookShare to Pinterest
Labels: prayer

Please join in praying for the following intentions of our Holy Father, Benedict XVI, for the month of June:


"That priests, united to the Heart of Christ,
always be witnesses to the caring and merciful love of God.
That the Holy Spirit bring forth from our communities many missionaries
who are ready to be fully consecrated to spreading the kingdom of God."
Posted by St. Peter's Church at 2:50 PM

Sometimes all it takes is a visit, a kind word, or a joke to give someone the lift that they may be needing.  Giving a building a lift is an entirely different story, especially when it's a Concord Hydraulic Passenger Lift!
Our plans to provide much-needed upgrades to our parish lift are well underway.  Work will hopefully begin this summer and be completed by the summer's end.  This poject is expected to cost an estimated $45,000.
A special lift fund has been set up for those wishing to make donations specifically for this cause.  If you feel called to help give this project a financial 'lift', your contribution will be gratefully accepted!
Posted by St. Peter's Church at 2:47 PM