Taking the Plunge: A Holy Saturday Meditation on Baptism...

While walking to church yesterday, a man approached me and said, “Excuse me, sir. My wife and I moved here a couple of years ago, and we have a child that we would like to get baptized.  What would it take to get him baptized here?”
After asking him a couple of questions, I invited him to phone to set up a time to meet.    Then he asked, “So how much is this going to cost?”
I said, “Oh, not too much....only your life....only your child’s life!  Call me when you’re ready.”
I’m not sure if he appreciated the humour, but I think he understood the point.
Baptism is not a ten minute ceremony, but a lifelong relationship.  Baptism is not a formality, but a joyful response to the gift of faith.
We baptize because we believe.   We believe in Jesus Christ as our Lord and God, as “the way, and the truth, and the life” (John 14:6).
The very word “baptize” means to “plunge” or “immerse” (CCC #1214).   So St. Paul’s teaching on Baptism could also go like this:
“Do you not know that all of us who have been immersed into Christ Jesus were plunged into his death?  Therefore we have been buried with him by plunging into death, so that, just as Christ was raised from the dead, by the glory of the Father, we too might walk in newness of life.  For if we have been united with him in a death like his, we will certainly be united with him in a resurrection like his” (Romans 6:3-5).
In many ancient churches, the baptismal 'font' was more like a small pit.  Three steps led the one to be baptized down into the shallow pit.  The three steps represented the three days the body of Jesus remained in the tomb.  After being baptized, the new Christian emerged by way of another three steps, united with the Risen Lord who rose on the third day.
On Baptism, St. Gregory of Nazianzus, a great theologian of the early church, wrote:
“Baptism is God’s most beautiful and magnificent gift.... It is called gift because it is conferred on those who bring nothing of their own; grace since it is given even to the guilty; Baptism because sin is buried in the water; anointing for it is priestly and royal as are those who are anointed; enlightenment because it radiates light; clothing since it veils our shame; bath because it washes; and seal as it is our guard and the sign of God’s Lordship” (CCC #1216).
Soon after I was ordained, a friend of mine said to me, “May you never get used to being a priest!”  (Thankfully this hasn’t happened yet!)   My Easter prayer for you is similar:  May you never get used to being a Christian! May you live as one who has been plunged into the life and “love of God in Christ Jesus” (Romans 8:39) and walk always “in newness of life” (Romans 6:4).
Posted by St. Peter's Church at 2:24 PM

7:00 p.m.     Mass of the Lord's Supper
(Personal prayer and Adoration of the Blessed
Sacrament to follow Mass until midnight).


"On the third day the friends of Christ coming at daybreak to the place found the grave empty and the stone rolled away.  In varying ways they realized the new wonder; but even they hardly realized that the world had died in the night.  What they were looking at was the first day of a new creation, with a new heaven and a new earth; and in the semblance of the gardener god walked again in the garden, in the cool not of the evening but the dawn."      - G.K. Chesterton, The Everlasting Man
Posted by St. Peter's Church at 10:11 PM

Why are the statues covered?

In our parish, since the 5th Week of Lent, this has been a common (and good!) question.  Here are a few thoughts by way of response:
The scriptural basis for the veiling of statues, crucifixes and other images is found in the Gospel according to St. John (8:46-59).  At the end of this passage, it is related that some of the Jewish people took up stones to cast at Jesus, who then escaped and hid himself.  On one level, the veiling recalls this hiddenness.
The veiling also symbolizes the fact that Christ's divinity remained largely hidden throughout his public ministry, even during his Passion and death.  Only after was his divinity made more manifest.
This custom, on a very practical level, also helps us to concentrate on the great essentials of Christ's work of redemption. 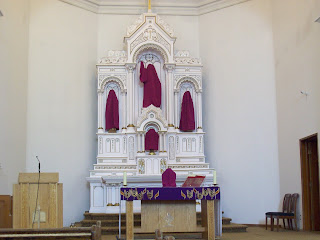 Shrouds over the sanctuary crucifix and statues... 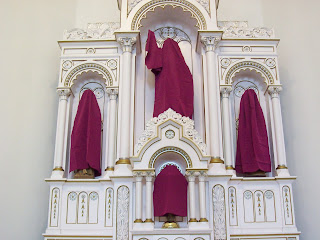 Email ThisBlogThis!Share to TwitterShare to FacebookShare to Pinterest
Labels: lent

The Season of Lent... 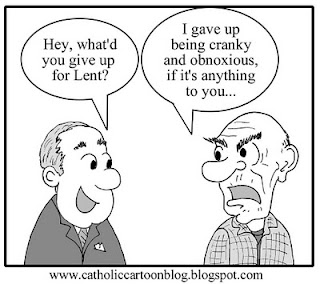 "The season of Lent should not be faced with an 'old' spirit,
as if it were a heavy and tedious obligation,
but with a new spirit of those who have found the meaning of life in Jesus and in his Paschal mystery and realize that henceforth everything must refer to him."
- Pope Benedict XVI, Angelus, February 26, 2006
Posted by St. Peter's Church at 4:08 PM